caminantes – the venezuelan exodus > in focus: meet the artist 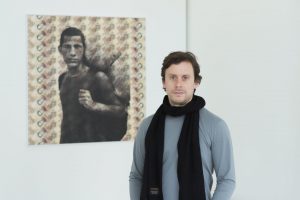 Felipe Jácome, born and raised in Ecuador moved to the US in his teens. At university, out of pure curiosity, he picked up a friend’s camera and began taking pictures. Now a professional photographer, Jácome’s research interests lie in concepts of migration, human mobility and refugees in different parts of the world. Caminantes – The Venezuelan Exodus, Jácome’s solo exhibition at Bradwolff, documents the thousands of Venezuelan migrants who fled across South America. Portraits of the Caminantes are printed on the colourful Bolivar currency, which suddenly lost its value amidst the crisis. These highly personal and imposing works evoke fear, hope and nostalgia. Éabha McKeown interviewed the artist on 20th February 2022.

(EM) In your bio it is stated that you studied at the London School of Economics. Can you tell us a little bit more about this?

(FJ) I was born and raised in Ecuador, but I moved to the US when I was 14 or 15 due to the financial crisis. My father is a university professor and my mother was a teacher – they were lucky to have job opportunities in the US. I enjoyed my time at London School of Economics, it was kind of like a bubble of its own. I had never really comprehended photography as a profession until late in university. There was no art or photography in my home growing up. The idea for me there was to study social issues related to migration and conflict. I got a scholarship from the university to do field work, and part of this was a photo essay on migration in Mexico. The theme of migration felt immediately close to me and I could relate to it personally from my own experience.

(EM) The series features a combination of mediums – print (photography), currency and wood. Do you feel that you are more of a photographer or an artist, or perhaps somewhere in between?

(FJ) I am a photographer 100% – my way of approaching the world is through a camera. In the last few years I’ve started exploring different art techniques which are definitely interesting as a means of communication, but I just dabble, or, let’s say I borrow art to give an additional dimension to photography.

(EM) Do you feel a certain urge to focus on subjects with which you can relate? How does this relationship feel once the works are at the ‘exhibition’ stage or more specifically, in a gallery space?

(FJ) As a photographer I feel as though I am always trying to communicate something or some reality, and so once it’s in an exhibit stage, then it’s accessible to people, and this is the ultimate goal, I guess.

(EM) Can you talk me through the process of making the works in collaboration with people you shared the journey with?

(FJ) It made the process that much more powerful. I am there, I follow people and I live it, I accompany it. Ultimately, I’m there as an observer, but once you can bring people into your process – people that have lived through this, and people that understand what you’re trying to do, the project is so much richer. Their experience, their grief, their pain, their nostalgia, their hope, everything that they carry is somehow transferred onto the work because they lived it themselves. When you’re making art about a big issue, one also has a role to collaborate, to share and to learn.

(EM) (Loss of) value and commodification of cash is a coherent concept in this project. What does (loss of) value mean to you?

(FJ) I think the key aspect is appreciating the value of money and the impact it had on its people. This is really what I’m trying to emphasize. I guess I hadn’t given much thought to giving valueless money through art, because I never produced this work for the purpose of it being sold. Of course, the works are for sale, they have been sold and have been well received; which of course I don’t mind, as this allows me to continue to do more work. But I suppose I had not framed it this way myself, but I do think it’s interesting that you did. I don’t think it’s false what you’re saying.

(EM) When depicting subjects or crises like this, artists often fall into the trap of spectatorship. How do you avoid this? How have you been successful in avoiding this for this project?

(FJ) This idea of spectatorship is impossible to avoid, right? You are a spectator or a voyeur or a witness. That is ultimately what you are when you go to share that reality with people. But I think you can avoid just being a spectator or witness by sharing, being there and opening yourself up and putting yourself in a fragile situation. For example, I walked hundreds of kilometres with them… I lived through their experiences. Perhaps this removes one from the trap of spectatorship.

(EM) Do you have any further developments in mind for this project?

(FJ) I don’t know yet. We find ourselves right now at a kind of bizarre stage within the Venezuelan crisis. The country has somewhat stabilised, has somewhat left its currency on the wayside and has adopted the dollar. There are still people leaving Venezuela, though not in the same numbers as they were in 2018. The context is now perhaps something different. I think the photos are still relevant and they still provide a glimpse into the crisis there. Other institutions have expressed interest in this project – in that light, if I had to produce this work for another institution of course I would do it. It’s getting it into places where people can see it. It’s getting eyes on it.

(FJ) Right now I am in Ecuador trying to continue a project I had started a year and a half ago. There was an oil spill in the jungle and the people from the indigenous community that were affected called me as I had worked with them before. I ended up watching this oil spill on this pristine amazon river going into the heart of the jungle – a very sensitive ecosystem where indigenous communities have lived for thousands of years. Even though I’ve grown up around these environmental catastrophes, I’d never seen it in my own life.
I’ve taken photos of people from this indigenous community and have been exploring staining these photographs with crude oil. It’s a brutal medium, which speaks very much to Ecuador; an extremely poor country, which has been allowed to “develop” through the oil resources at the expense of these communities and the environment. The plan is to do something collaborative with the indigenous people of the community to work on the stains with them. So, along the same lines as working with Erika and the women in this exhibition.

(EM) So ultimately, collaboration would be a main focus of your practice?

(FJ) Absolutely. The artwork has to be an expression of their voice. While being objective and an observer is important, ultimately in this world that is so connected, if I would just ignore their voices I would continue this unfortunate trend of ignorance.
***

“My way of approaching the world is through a camera. Through a camera, you can really approach people and things in the world and can get close, and understand people’s reality on the ground.”

Éabha McKeown is an MA student of Arts and Performance Research Studies at the University of Amsterdam, and is interning at Bradwolff. Éabha completed her undergraduate education in History of Art and Philosophy at Trinity College Dublin. Now based in Amsterdam, her current research interests lie in gender, the body and (post) colonial identity, through the practice of writing and curation.

Felipe Jácome’s Caminantes will be on show at Bradwolff Projects until 26th February.