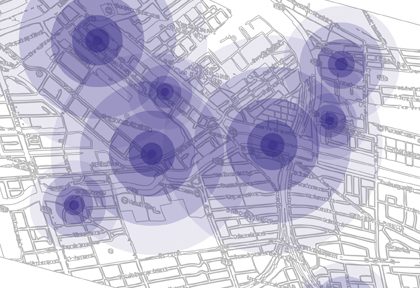 in communication with others

Natasha Taylor’s exhibition ‘In Communication With Others’ focuses on signal sounds as an extension of the human voice. Taylor has a strong interest in the voice and its transmittal capabilities. The voice is one of a couple of essentials that make us human. The use of our voice is one of the oldest and most primordial ways in which we are able to make our thoughts known and share them with each other. The voice is something most of us have and use extensively. Due to fairly recent technological inventions such as print and recording equipment, we are no longer solely reliant on the voice for information transference. In fact, the voice is now so ubiquitous that we often fail to appreciate how inextricably intertwined it is with our existence and how it shapes and is shaped by our daily experience.

Signal sound communicates a message that we can decipher through listening. The tapping sound of a traffic light at a crosswalk for example, indicates that it is safe to cross the road. How are these sounds used and with what purpose? The origin of this is in Taylor’s perception that they can inform a large group in a short time, these signal devices are much more effective than the human voice which has its limitations [volume, language barriers, overuse]. Natasha Taylor will draw attention on this subject during her site- specific work period at BRADWOLFF PROJECTS from 1 July till 27 July. She does this in collaboration with art historian and guest curator Hester Jenkins.

Natasha Taylor graduated from the Academy of Pop Culture in Leeuwarden in 2010 and has carried out various projects in collaboration with institutions such as the Fries Museum, Museum Dr8888, NP3.tmp & Sign. Her projects focus on sound and cultural codes. In addition to her artistic endeavours, she works on a project basis as sound art teacher at the Academy Minerva Hanze University Groningen and has led several projects such as Radio Mobi & Incubate Open Source Radio, where she explores the potential of radio as a “transmittal” medium.

Art historian Hester Jenkins is head of education and projects at Museum Dr8888 and has organized their events such as Parade de Anderen, the Dada Film Lab, the exhibition HHHH in Dr8888 and philosophical salon for Radicale Middelmatigheid. Jenkins is particularly interested in making the investigative aspect visible in artistic processes and widening art experiences by activating the less customary senses. Sound art seems eminently suitable. As an independent curator she organized inter alia the exhibition The Dweller – visiting the work of Raoul Dohmen.